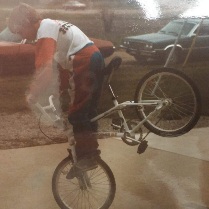 Used to ride starting back around 1985 or so when I was 10-11 years old. Gave it up in 1991 when the tricks were getting too hard lol (thanks to Kevin Jones lol). If I remember correctly I started out on some kind of Team Murray bike, then an 85 GT Performer, then an Osborn Pro, then an 89 Master bash guard. I eventually picked up a friend's 87 Pro Performer frame because the Master was too heavy. Then came along the Kevin Jones era and things got too hard. And since my driver's license came along as well, it was pretty much over. Looking to get back in again.