Growing up and riding bikes as a kid meant freedom. Got into bmx and starting flipping bikes to pay for upgrades. Jumping, halfpipes and flatland was it since I couldn't afford to race. Fav bike I owned was a custom made chrome GT f/f with yellow & gold components, yellow Z-rims, GT lay-back post, chrome CW bars and a Zeronine plate. Frame was built my my friend's uncle who worked at the Santa Ana factory. Parents mistakenly gave it away after I joined the military but they still got my 26" Schwinn cruiser. I also had a square tube Super Stroker. After thirty years, my first project was a 1961 Evan's cruiser with square fenders. 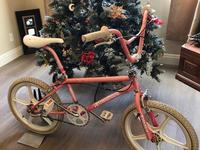 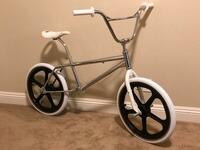