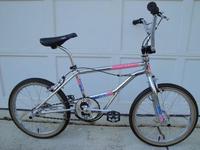 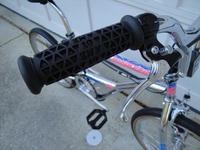 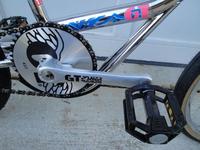 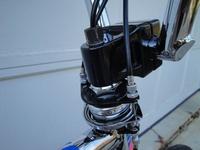 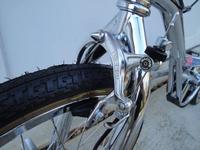 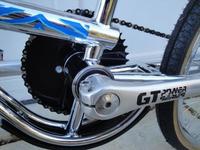 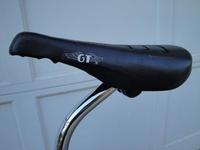 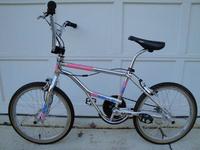 The Crown Jewel of My Collection!

In 1989, I received the all new GT Aggressor frame and fork for Christmas! My riding at the time was progressing more toward street riding and away from flatland. On Christmas day, I quickly disassembled my Maui blue 1988 Pro Freestyle Tour and started transferring parts over to the new frame and fork! As soon as it was built I was out grinding every bench and ledge that I could find! I enjoyed that bike a lot riding vert and street but, I didn't find it to be a great flatland bike at all - during the occasional flatland session! The unimaginable happened though, when late in the spring of 1990 - my Aggressor was stolen and laid down in the middle of the street. A car came over the blind hill, leading up to where the bike was placed, and ran it over! It was drug underneath the vehicle for over 300 feet and destroyed beyond repair. I was sickened! The bike that I am now posting is an EXACT recreation of the 1989 GT Aggressor I had back then! I have spent the last several years accumulating parts in an effort to bring that bike and my memory of it, back to life!

NOS parts include GT/A'me Grips, Dia Compe Tech 7 Levers, Odyssey Gen 1 Gyro and Cables, SR stamped GT Mallet Stem, GT Epoch Headset, Dia Compe Nippon Front Caliper, 88 GT Seat Post Clamp, Odyssey Pit Bull Rear Caliper, GT Freestyle Tires, GT Superlace Wheelset, GT stamped sealed Bearing Bottom Bracket, 89 stamped GT Power Series Cranks, GT Winged 43T Front Sprocket, Shimano MX30 freewheel and (4) medium length GT Tube Rides.
The frame and fork, which was in amazing original condition, was purchased from Shad4130 (thanks again bro!) and rechromed, as were the Gen 1 Haro Kneesavers, the circle stamped GT layback seatpost and the spindle bolts for the Power Series cranks. Ultrahive perfectly recreated the 89 GT Aggressor stickers - you are the man! While the silver SR SP 474's - which were NOS with shelfwear - were powder coated black by none other than Chip at C4 labs! The only survivor part is the near mint 89-90 GT wing seat that I purchased from Shock6. Thanks to everyone on the museum who helped me bring this memory back to life!

What a machine!!! Super sad story , I would have nightmares.

For all the Homies that never got a chance to hook up their ride ....

It's your bike, build it how YOU want

This is a badass build for sure.  Soon I will get my NOS 89 together.  I have no time right now to finish up the last few items.  Yours is inspiring me, so soon I will get it together.  I sold Shad4130 my 91 electric red aggressor, which he built up with some sweet parts.  My hat is off to you on this bike!

Thank you Sir! Can’t wait to see yours complete!

You and me both!