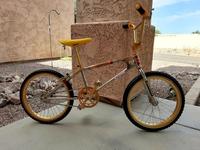 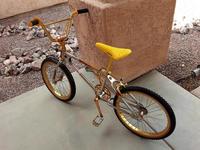 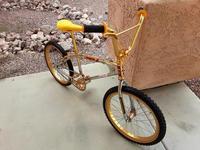 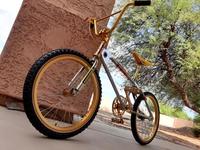 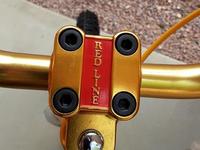 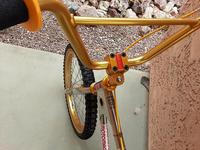 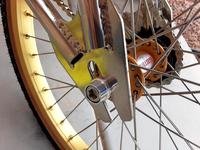 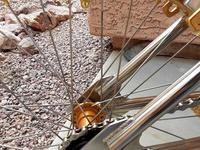 Recreation of my childhood bike from NOS parts! The golden child!

My 2nd entry to the Museum. This is a replica of my childhood bike. I had 2 paper routes , and saved money for a year to be able to afford the original bike. I had to beg my Mom to basically let me clean out my savings account to be able to afford the bike. It took a lot of convincing , and pouting to finally get my way! She just couldn't understand why I wasn't happy with my department store BMX bike and needed such an expensive bicycle! That was a lot of $ back then!

My older neighbor had gotten a brand new nickel Motomag for Christmas of 1980  , and I was infatuated with it! I knew I wanted a Mongoose! We used to ride across town to the 2 local bike shops just to stare and drool over the new models. I remember seeing the frames in all of the colors they were offered in on display hanging from the ceiling....it was love!
I worked pretty hard and focused for a 10 year old to save the $ to be able to afford my own. My friend Scott then got his red Team Mongoose in late 1981 ( the other bike I have on here is a tribute to his) and I was more driven then ever. With my 11th birthday coming up , I was hoping to get enough birthday $ to be able to buy all the parts I had picked out to build my dream bike.
Finally in late February 1982 , 11 year old me had the funds to pull the trigger , and also learned about sales tax wanting even more money then the target number I had added all the parts up too!! I walked into Redwood Cyclery in Redwood City Ca. and ordered it up! They had the frame in stock , as well as some other parts , but we had to wait a week for the wheels.
The day finally came when it was ready for pick up!! I was beyond excited! I remember the bike shop guy setting the seat and handlebar height and angle to fit me , then taking it for the first test ride! Best thing ever! That bike was my life. It was my freedom , and it was beautiful! I used to clean it every morning before taking it to school. I also used to thrash it like a BMX bike was meant too!
It served as my trusty steed for about 4 1/2 years of daily use. I wish it had an odometer , because I probably put hundreds if not a thousand miles on it over the years! We used to leave first thing in the morning and as long as we were home by the time the street lights come on , we wouldn't get in trouble!!  I wore out tires like crazy. I went through 3 or 4 sets of pedals...always replacing them with KKT lightnings. I stripped 2 drive side crank arms. I wore out several aluminum drive wheels , I broke the original handlebars doing my paper route , and replaced them with Redline Proline bars. It must of had 5 or 6 different sets of grips to suit my needs, or taste at the time , including Oakley's in the latter years. , and 2 sets of rims! I rode it to death until I got my motorcycle permit at 15 1/2 , then it got stowed away when I could ride a motorcycle. I eventually sold it at a garage sale for an amount I cant , and don't really want to remember.  I wish I had the foresight to keep it like some of the dudes on here did , but girls and cars took my focus away from it.  Instead , 30 plus years later I spent over 10 times the original price to duplicate it with ALL NOS parts!
I did not set out to build it. It started with accidentally finding the NOS frame , which as luck would have it , was the same CC1 ( March of 81) stamp as my original bike! That set the direction!  Crazy....so I embarked on the years long adventure of gathering the rest of the parts. Wasn't easy , wasn't cheap! The hardest part to find was a Redline Brute stem in gold that was NOS....got lucky and found one a couple years back. The rest of the stuff also wasn't easy , but after 5 years of eBay and the museum , I had gathered all the stuff to build the bike exactly as the first bike was....with 2 exceptions. One is my original bike had Sunshine hubs , but I eventually upgraded it to Bullseyes , and the second is the sealed bearing bottom bracket in gold. My original had the ball bearing set that came with the cranks when new , and I have the one that came with these cranks , but decided to go the other route. Just like my original , I remember all the components being different shades of gold , but that's the way it goes. I could of had everything re-anodized at once to make them match , but then they are not NOS and not just like the Og.
The parts list goes as follows:
NOS CC1 dated Mongoose Motomag frame with 1 decal replaced
NOS 1 inch Team forks
NOS Tange headset in gold
NOS Dirt Skirt in gold
NOS Redline Brute stem in gold
NOS Race Inc. bars in gold
NOS Grab On grips in yellow
NOS 81 dated Dia Compe pre-bent brake lever in gold
NOS 81 dated Dia Compe MX1000 brakes
NOS 86 dated (until I can find an 81) brake cable in yellow
NOS Dia Compe brake cable guides in gold
NOS Takagi Tourney 170 MM 3 piece cranks in gold
NOS KKT Lightning pedals in gold
KMC nickel chain
NOS 81 dated Shimano freewheel
NOS Bullseye 36 hole hubs in gold
NOS Araya 7x 1.75 36 hole hoops in gold
NOS Race Inc. seat post in gold
NOS Suntour seat clamp in gold
NOS Mongoose seat in yellow
NOS Tioga Comp III Rainbow label tires 20 x 1.75 and 20 x 2.125
NOS Tuf Neck valve stem caps in gold
Duro thornproof tubes

I don't like kickstand holes in a Mongoose matchbox.

Newbie...
No front brakes, except for freestyle.
Adjust your seat and bars, so it looks like you actually ride.
Use cruiser bars on cruisers.
No laybacks on cruisers either, jeez.

People always tell me...
"Money doesn't grow on trees."
Then why do banks have branches?

Just read all the NOS, good Lord I hate to know what a NOS stem like that runs. Still a killer build and I can’t stop staring at it

Super impressive! show stopper for sure.

"In three words I can sum up everything I've learned about life: it goes on." -Robert Frost