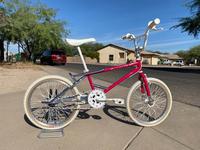 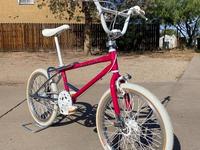 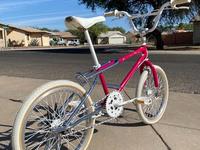 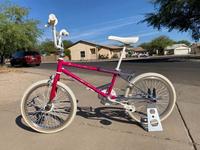 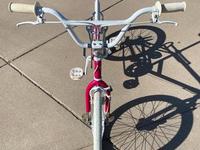 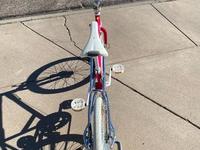 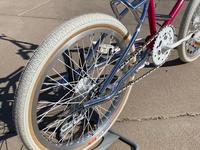 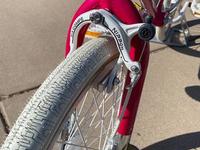 Incredible survivor from the coolest era in Freestyle!

Sometime in 2019 I saw this bike on my local CL, called and turned out to be a local collector I knew who was selling it. At the time he wanted more than I was willing to pay. A couple of months went by and the bike was gone, no biggie. A few weeks after that, I see it again, but this time the wheels were gone and some Walmart garbage was on the bike instead...yet, the same money was being asked. A couple of weeks go by and the bike is gone, I though, I hope nobody paid that kind of money for it with garbage wheels, but what bugged me the most was that the original wheels were gone and why would anyone do that? a couple of months go by and BAM! there it is again. It's January 2020 now so I called the original seller and barked at him about the wheels and he goes "nah man, I didn't sell them and the bike has been sold twice since I had it". It all made sense...I called the number on the listing, met with the guy. He told me he had nothing to do with bikes, that he did a flooring job for a guy who gave him the bike in trade for the job, for $600! After talking for a while, he said he just wanted the bike gone, he understood he got taken and sold it to me for a lot less than what he had into it. Over the past couple of months I collected the hubs (special thanks again to HEFRMLA!) and other wheel parts so I could build the wheels and finish the bike. I spent a couple of weekends taking apart the bike to the last bolt, cleaning and regressing everything and finally finished it last night. The most amazing thing about this bike is that it had never been taken apart or even adjusted, with the exception of the wheels and the seat post height. Every bolt and nut had that factory torque and snap from the first time they are broken loose, no double washer marks anywhere...you get it, it was unmolested.The paint is great with some chips and light scratches, the chrome is killer with some scratches on the rear platforms. Overall, I think it belonged to a kid who rode it around and nothing else and somehow spent the last thirty years in some closet. I feel lucky I ended up with inspire of the many times it went up for sale...meant to be? maybe....
Bike Check
Frame: 1987 Schwinn Predator Free Form Pro, 4130 chrome-moly - original paint and decalsForks:  1987 Schwinn Predator Free Form Pro, 4130 chrome-moly - original paint and grip tape on platformsHandlebars: 1987 Schwinn Freestyle, 4130 chrome-moly - original paint Grips: Generic Mushroom type vinyl - originalStem: ACS - originalHeadset: Schwinn Steel retainer ball - originalDetangler: ACS Rotor - originalBrake levers: Dia Compe Tech 6 w/locking buttons - originalFront brake: Dia Compe 883 Nippon - originalRear Brake: Dia Compe Center Pull - originalFront Brake cable: Dia Compe 86 stamped - originalRear Brake cable: Dia Compe 86 stamped - originalSeat post: Schwinn 22.5, fluted - originalSeat: YO! Rock N Roll with roller by Viscount - originalSeat clamp: Schwinn Alloy - originalBottom bracket: Schwinn S stamped steel retainered ball - originalCranks: SR chromoly - originalSprocket: Schwinn Tuf Neck style power disc and sprocket - originalChain: KMC - originalPedals: HTI-853 plastic bodies, chromoly shafts - originalFront Wheel: Araya 48h hoops laced to JY 48h loose ball hub, 182mm Mission white spokes and polished nipples off 1987 Pro Class IV wheels, Porkchop decal kit - addedRear Wheel: Araya 48h hoops laced to JY 48h loose ball hub, 182mm Mission white spokes and polished nipples off 1987 Pro Class IV wheels, Porkchop decal kit - addedFreewheel: Shimano MX-30 - addedTires: Panaracer 406 20x1.75 - added

Low end French does it for me 🤣

Now that's awesome! I miss these bikes from the 80s and what surprised me is that Schwinn still makes the Predator Team!
My dad has a Schwinn which is a race bike. It's from 1982 if I'm not mistaken. I also had a children's bike from them, but I got rid of it a long time ago. Now I'm looking at new bikes, but unfortunately it's very difficult to get a Schwinn in the country I live in

Beautiful Predator Pro Brother,I would love to have one in My collection

R.I.P Kobe you will always Be A Legend