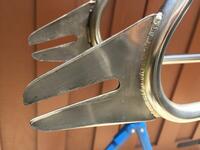 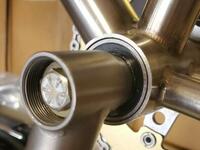 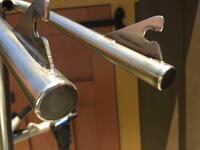 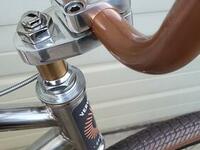 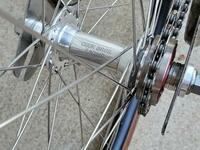 Stainless Cruiser Prototype, made by Gary Cook after he sold his share of CBR

There isn't agreement on the provenance of this gorgeous frame. Bobby Cook (Gary's son) believed it was made when CQP was sold, but before they tried to launch Just Cruz'n in 1993.

Others believe it is a prototype from the mid-80s after Gary Cook sold his share of Cook Bros. Racing to Jack Witmer, but before CQP was started. Gary did make another stainless frame, branded as Cook's, but it had similar / same geometry as the original Cook's Bros. Racing cruiser. The most obvious design difference with this frame is the sloping 3rd bar. The original CBR cruisers, and the later Cook's cruiser had level / parallel-to-the-ground 3rd bars.
But there are other design differences that make this bike unique. For one, the frame is quite large, even for a 26" cruiser. The seat mast measures 19.625" C-C and 21.25" C-T. The seat mast is also curved.
The bottom bracket bearings are SR-10 (SAE 1-3/8") and the spindle is 5/8"--the same as old school Cook Bros. Racing BBs.  EXCEPT: these bearings press directly into the frame; no cups. This is similar to a Spanish BB, except that it pre-dates that standard and the spindle and bearing dimensions are very different.
But really whacky is the 132.5mm rear dropout spacing. Quite odd for a frame that doesn't have a derailleur hanger or any cable stop braze-ons. I can't recall any hub manufacturer who would've had a 130-135mm o.l.d. single speed hub back in the late 80s, or early 90s. Maybe coaster hubs were that wide?
An enigma!
Frame: 26" 17-4 stainless steel. 23.25" top tube, C-C. 1" tubing seat mast, top tube, 3rd bar; 31.8mm downtube. Curved seat mast (19.625" C-C and 21.25" C-T). 132.5mm rear dropouts. SR-10 / 1-3/8" press-fit bottom bracketFork: 26" 17-4 stainless steel, 1" tubingSeat post: CW Racing "Brassy" layback with brace; maybe the only one in existence?Handlebars: Gary Turner BXGT-Pro welded by son Craig Turner, copper plated by BMX Museum member ChabyStem: 1st Gen Pro Neck, polished, with bronze bushing installed as stem stiffener and blingCranks: CQP Pro-Lite 177mm titaniumSpider: CQP aluminum BMX / Single speed Chainring: 43t Pete's Precision ProductsHubs: Polished 2nd Gen Cook Bros. Racing (with spacers on the rear to get to a 132.5mm O.L.D.)Spokes: Phil Wood double buttedRims: Velocity CliffhangerSaddle: NOS 1970s Brooks B17 NarrowGrips: Brooks leather "plump" in British racing greenPedals: White Industries platform with Bruce Gordon stainless tubing toe clipsFreewheel: 17t White Industries Brake Lever: Paul Components 2nd genBrake caliper: Re-Issue Dia-Compe NipponBrake cable housing: stainless spiral woundGuts: IdealeSeat post collar: Climax 2-PC stainless steel shaft collar

It is better to sting with the truth than to comfort with a lie.

Insane . I love it

Your tracking number is in PayPal

Cool bike,i have one a little different with bmx spacing and my 3rd bar has a slight curve to it.My top tube is 22.5 inches and my seat tube looks to be about 1 inch lower than yours.I have not built it yet and has never been built.
How long is your top tube in inches c-c

Wow, that sounds really cool. A slightly curved top tube, huh? Do you mind sharing a pic or two? I've had a lot of input over the past couple years on my frame, but no one is certain about origin (i.e. who actually welded it, when it was made, and what the intent / market was, with the whack MTB spacing).

I'll measure my top tube and other things so we can compare.

So my frame is quite a bit taller and longer than yours. Huh. Really interesting!

Here is mine,19 inch seat tube center to center of top tube.Your's is about 1/2 inch taller i think.I could tell your top tube is longer. 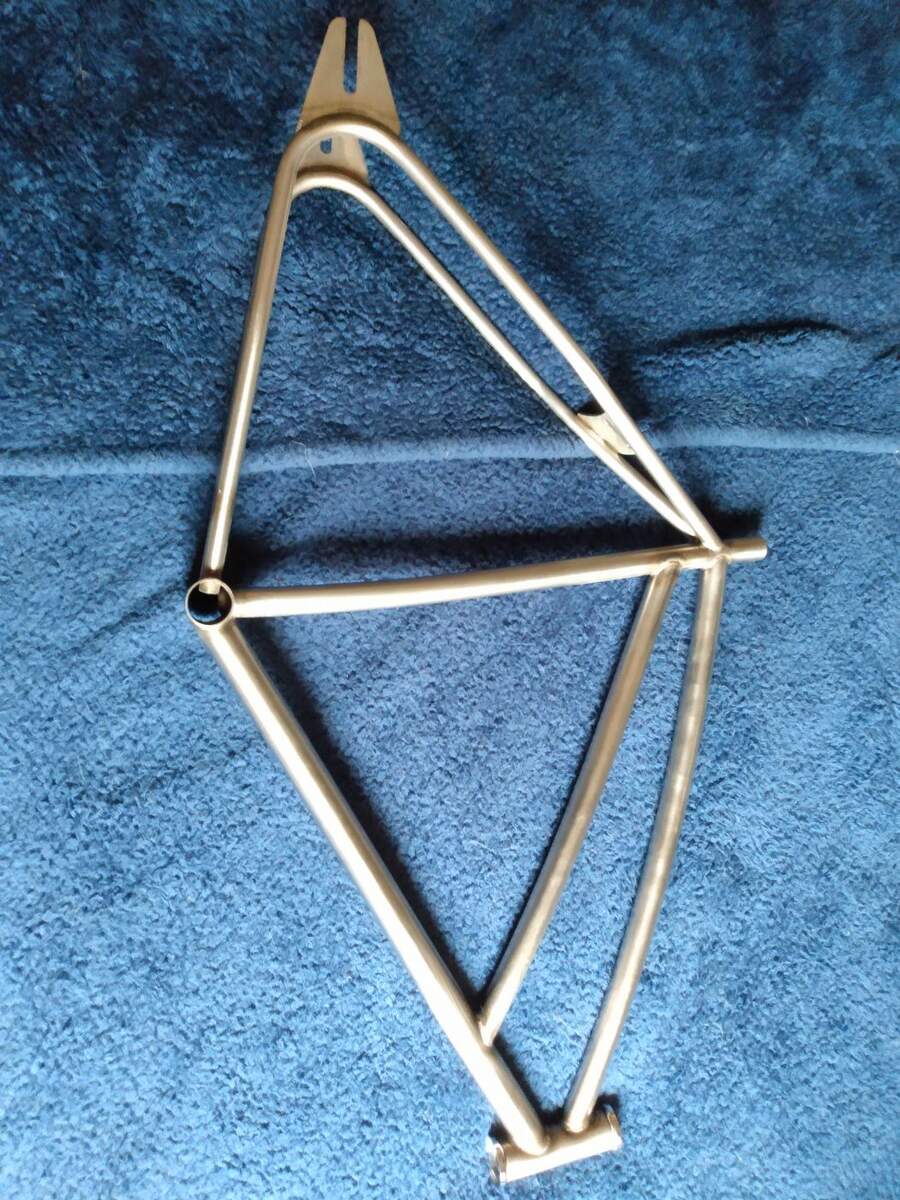 Really trippy! Yeah, they both have a curved seat mast, but yours a curved 3rd bar. Both have short head tubes and press-fit bottom brackets. Very cool. Thanks for sharing!