Here is my Knight Bike Co. Proformer, built up as a GT Pro Freestyle Tour. It started with the limited production freestyle cruiser F/F made to honor one of the most popular bikes from BITD. In the interim of accumulating parts, I sent the F/F to my good friend Joe, owner and operator of Brooklyn Machine Works (BMW) for a couple of modifications. He welded on the gyro tabs and fork cable guide and it was a top notch job as usual!

I briefly owned an original GT Performer BITD, but I wanted to go in a different direction. Thanks to Aleks (Acuzer), Rividude, DemonGT, Floofy and others, I really love the 87 GT Pro Freestyle Tour Team Models, so I modeled this build after those bikes. As with most of my builds, I utilized a combination of used/restored and NOS parts. The bars are custom made one off's (actually, 2 off, as another member here picked up the only other set made) by Chip at C4. Chip is also responsible for the sick dayglow powder coat job on almost all of the parts. I'm not sure what the color name is though, as it's hard to nail down, but Chip states that this is a factory GT color. The bikes color is like a Chameleon in that it changes color (sometimes drastically) in different lighting! It's really difficult to get consistent looking photos (in terms of color) since it varies with the type of lighting available. Three of the images used above appear to show the bike as pink due to being shot on an overcast day, which is not an accurate representation. The other image was shot on a sunny day and shows the color variations beautifully!

Decals are the PFT versions from AJK. As much as I like the OG Performer decals from 84/85, I really like the PFT decals from 87, so I went with those! The Power Series crank decals are silver stencil decals from ultrahive (typical excellent job). I wanted to reverse the original black on silver of the GT cranks, so I went with Siver on Black. These are knock off cranks as this is intended as a rider! I picked up the GT threadless stem from evil bay and left it as is so as to retain the GT markings. I really wanted the custom mallet stem made by IronHide in the 1 1/8" size, but he only made 3 and another member here was lucky enough to pick up his last one just recently! I think it would have put this build over the top, but I'm satisfied with this stem's look and where it positions the bars.

True GT parts are as follows: the frame & fork standers, Pegs, GT stem, GT stem compression bolt, GT seat, platform pedals, Chainring/Chainring bolts and of course the GT high flanged 48 hole hubs mated to Sun rims. The extra weight of this heavy duty F/F (not to mention my extra weight) kind of warranted the 48 hole wheel set. Also, I think they make the build even more unique as I really haven't seen a cruiser with 48H wheels before. The front brake is a genuine Nippon (which I restored - powdered black and painted in the white text) and NOS Tech 77 levers from Ebay. There is also the NOS Black lower Gyro cable with a newer black upper cable. I sent the wheels to Dan's to get built and asked for black spokes with the stock brass silver nipples, but they messed up the order and went with stainless Spokes instead. I was initially disappointed, but I grew to like the silver spokes and think they pick up on the silver power disc nicely. I went with Maxxis DTH tires since they resemble a freestyle tire and I must say they roll like a dream - smooth as butter!

All in all, she turned out as great as I envisioned and hoped. She also rides like a dream! It's a solid built machine with substantial weight that implies great strength, but it's to be expected from the beefy tubing and dropouts. I'm quickly regaining my riding confidence with this bike because it rides so well and at 6'2", it fits me to a T.

That's freakin Awesome!
You bringing this on Saturday?

The SHIMANO DX pedal is a nice BEER BOTTLE Opener...

I'm glad I clicked on this thread. That's pretty cool.

I love these Knight Bikes and yours is extra sweet!

"Time is a great teacher, unfortunately it kills all it's pupils"
"BMX Mausoleum, where old bikes go to die and have their picture taken" Hector Dangus

Oh snap, didn't realize it was approved. Thanks for all the comments guys! Gary, I'm honored to have your feedback!

Oh, and you think that's a lot of photos...I'm about to open the flood gates!

Matt, yes, this is what I'm bringing on Saturday!!! I'm really hoping and praying that the weather cooperates! I want to redo the photos cuz I don't think they do this bike justice. I really think it looks better in person so you can tell me on Saturday.

Still want me to bring my Sport?!

Okay, so I take tons of photos of my builds, so here are some additional for easier viewing and enhanced details:

Here I am with the bike on Sunday:

And my good buddy (like my brother) Tony aka Gunluva here on the museum:

Here it was with the 4 piece GT bars before I received the extra decals to put on the custom bars: 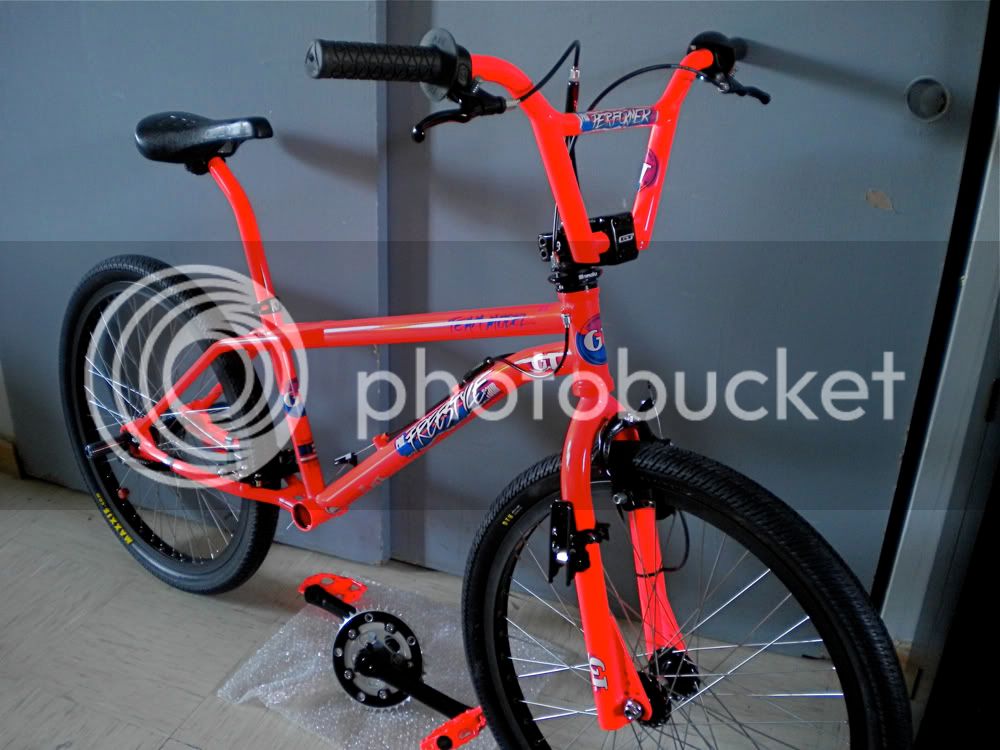 notice the nippon did not yet have the white inlay either. 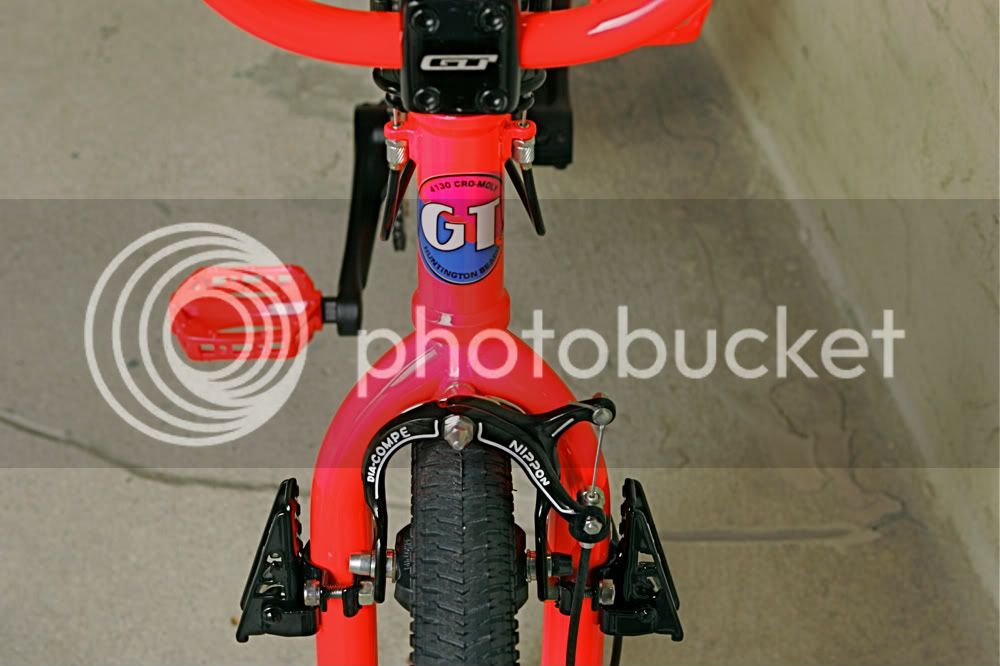 Mockup before sending out for powder (with little miss nosy body):

Back from Chip with fresh powder (iPhone pics):

Absolutely beautiful!!!  Excellent job Marcus, I bet she rides like a dream!

Absolutely beautiful!!!  Excellent job Marcus, I bet she rides like a dream!

Thanks rinsa! She really does ride nicely! I wish you were here on the East coast so you could take it for a spin.

BTW, I realized I slipped in the wrong photo along the lines...that wasn't supposed to be included (at least not yet).

WOW!!! That is just amazing how it turned out!! You really set the bar high for these custom builds. I love the way the newer parts blend in with the bike. Everything looks like it evolved together since '87. Congratulations on a great build!

I DON'T HAVE ANY MORE BIKES OR PARTS... ALL MY PICS ARE OUTDATED

"The more people I know, the fewer I like." - gaijin

WOW!!! That is just amazing how it turned out!! You really set the bar high for these custom builds. I love the way the newer parts blend in with the bike. Everything looks like it evolved together since '87. Congratulations on a great build!

That says a lot coming from you Aleks!!! I have to credit you with a lot of the inspiration to build this bike! Your builds are just stellar and you know how I felt about your tangerine dream! Thanks for the kind words.

this is the sickest cruiser EVER!! looks like chip did a out standing job on the color. fav'ed immediately. glad to hear some of my builds inspired you. my name does not deserve to be mentioned in regards to this build....truly amazing job you did.

this is the sickest cruiser EVER!! looks like chip did a out standing job on the color. fav'ed immediately. glad to hear some of my builds inspired you. my name does not deserve to be mentioned in regards to this build....truly amazing job you did.

Wow! I'm grateful for the accolades! You're just being modest dude; You and your wife have some truly beautiful bikes!

I have to say, I was fearing some backlash from the true GT die hards over this build, due to either the choice of parts, decals or who knows what!

Chip did an outstanding job on the powder and I'm particularly impressed with the custom bars he fabricated for me. I approached him about cutting and re-welding some NOS GT Performer bars and he then came back and said he could probably just make a new set at an appropriate size for cruisers. I was skeptical at first, even after seeing the work he did on that beautiful Haro Master Cruiser, but I'm a true believer now!

BTW, did Chelsea peep my cat Stimpy in one of the photos?

When we adopted her a few years back, we also adopted a boy (who has since passed away) and he was named Ren.

MARCUS ALL I CAN SAY IS WWWOOOWWW !!! ANOTHER ONE OF UR BIKES ON MY FAV LIST , AWESOME JOB

Great job, I've never been much into freestyle bikes but that's a beautiful bike.  Great attention to detail.

Dude, that bike is SICK.  I love these bikes, but this one is my favorite of them all. Awesome build man.

ummmmm
yeah
this bick is sick!!

I sit alone in my four-cornered room
staring at candles.........

OK, I don't have any knowlege of bikes made for the last 20 years. Never heard of Knight Bikes (not a knock, I'm just strictly old school). BUT this is one of the more creative bikes I've ever seen. The thought process is mind boggling and the execution is flawless. The blending of the eras is really, really nice. I normally gloss the retro builds but this one is the sickest. Very well done.
Al

Thank you all for the very kind words. I'm glad you all like it. It took me 7-8 months of planning and accumulating parts. What I thought would take the longest (the powder job - due to the upcoming Rockford event), ended up being the shortest. I love the old school look with the new school technology and the integrated HS is pretty trick (my first). Hey Sarge, if race bikes are more your thing, take a look at the GT Speed Series (under my bikes) I just put together for my daughter.

what are you going to do with the other pink gt bars?

what are you going to do with the other pink gt bars?

I haven't really thought about it. My buddy was trying to get them from me to build up a Speed series, but I told him they aren't the race version (4 bar). Are you interested in them?

as much as it would look perfect on that, i just can't part with it.

as much as it would look perfect on that, i just can't part with it.

If you ever want to part with it, please let me know; calling dibs now