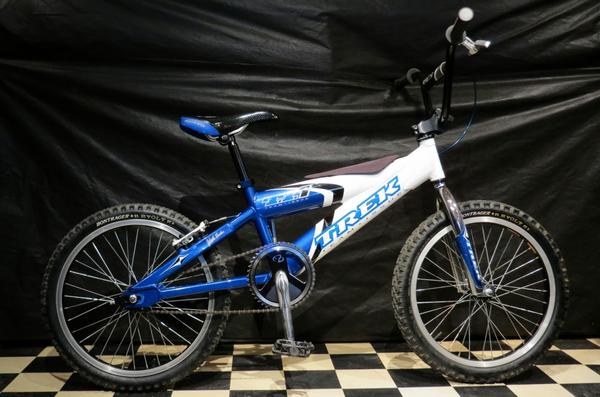 Stolen from locked garage in the Inland Empire in SoCal.  Serial number :  RMAJ900067

This bike was stored away after only minimal use. Totally original and unaltered with exception to the barends brake cable, and handlebar pad. All other parts are orignal Trek and Bontrager from the factory with very little wear. Including the orignal Bontrager grips and staggered tread front & back tires. The bike even came with a great story. The seller, a truly cool and genuine dude who has been racing for many years and seamed like an old friend I hadn't see for years, explained that after Wade tested and raced this bike a few times, Wade gave it to him and he raced it a few times, rode it a few times off track then stored it for about ten years. He also mentioned  that it was a Wade Booth test bike and that trek used the bike for R & D purposes. Placing sensors in the frame to collect data about the preformace of the frame's design and construction. Futhermore, this particular bike escaped getting cut into pieces when the factory was finished with it. Before seeing the bike in person I had plans to upgrade the bike substantially and take it to the next level with aluminum forks,  cranks, and some new alloys. But after hearing the history of the bike from the seller and seeing how it is in such excellent original condition, I couldn't bring myself to change the bike and decided only to restore the surfaces by removing what little rust and corrosion I found; washed, waxed, and buffed it, and threw on some new barends & axel nuts I had in my tool box, and a The handlebar pad I had laying around. There was only one of the orignal barends and it was badly damaged. I am pleased with the way the bike turned out. And although I'm not really much of a fat tire guy, I must say that they are growing on me along with those big burly Bontrager Bruiser wheels that came on the bike.

Thanks for stopping by to check out this Wade Boothes Team Issue 1.

More Bikes From 1fastmotodude (35 bikes in museum. View all)