Big company, started with MTB's, now has a full line of bicycles. Even some nice complete BMX's

1997 Specialized started it’s Fatboy BMX Line up with just 4 race models. They were instantly recognizable
by the fat oval tubes & Y shaped frames. This design was something no one had seen before.

1999 Specialized would release 4 new frame designs. First a new Monocoque aluminum frame in both 20”
& 24” versions for the Fatboy race line. A new 4130 street frame with the 415 line, & the all new 4130
Vegas line for dirt jumping. This would also bring the Fatgirl with a sloped top tube for female riders. The
Monocoque frame would prove to be stronger & more durable than the previous Y framed race models.
The Vegas & 415 would complete the lineup with 10 complete bikes.

2000 Would make more improvements to the Monocoque frame, redesign the 415 & improve the Vegas
frames. Specialized also added the TRX version for a mid level bike. Little racers would also get smaller
versions of the Monocoque frame in both Mini & Expert sizes. Color Options for some models were added.

2001 The Fatboy name was dropped from all the models. The year would bring more improvements to the
Monocoque frame & would introduce the S-Works Hydro-Form frame for racing. Both the 415 & Vegas
frames would again see improvements along with adding an expert version of both.

2002 Brought the beginning of the Hydro-Form Hemi line. The same technology from the 2001 S-Works
frame was brought to the Hemi Pro, Hemi Comp & a 4130 version for the MX. Improvements were again
made to the 415’s & Vegas frames designs with dual cable routing. The S-Works DIRT & ST (street)
frames were introduced as frame only options made of high end Reynolds 853 butted Steel. The S-Works
Race frame was improved & a 24” model was added. Both came with an optional Disc Brake mount. The
Vegas line saw the introduction of the Dirtboy & TRX 24”.

2003 Brought 15 models plus 3 S-works frames. All the race bikes now came with Euro bottom brackets.
The Vegas frames were redesigned again to look more like the S-Works Dirt frame. The 415 line would also
undergo a transformation to look like the S-works ST frames. The Streetboy would be added to the 415
family.

2004 Would bring big changes to every bike. The 415 & Vegas lines would be replaced by the New Fuse
models. A New S-works Fuse frame & a New S-works Hemi frame were introduced. The Hemi frames
were completely redesigned to be lighter, stronger, & stiffer. And a full line of Kids Hemi’s were added
from mini, junior, & expert.

2005 This would be the last year Specialized offered a full line of BMX bikes. The Hemi’s would only get
new paint jobs & decals. The S-Works Fuse frame would see improvements but the S-Works Hemi would
remain the same with a Brushed Aluminum option.

2010 This would be the last year of the Fuse BMX line.

2011 Specialized would create the P Series BMX Line. Only 3 bikes would be offered this year. A P20
Amateur would be the lower grade frame & bike. A P20 Pro would be the High end Frame & complete
bike. There was also a P24 added to round out the BMX models.

2012 Specialized would Drop the P24 form the lineup. They would add the P18 Amateur for younger Kids
with 18”wheels.

2014 Specialized would make a all new Reynolds 520 Double Butted Frame for the P20 Pro. The Amateur
would come in Hi-Ten Steel again. 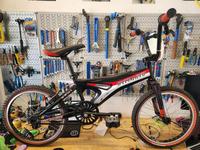 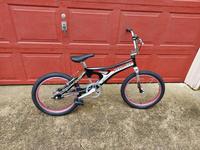 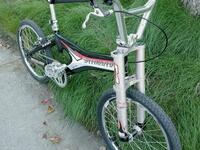 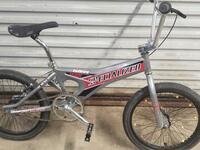