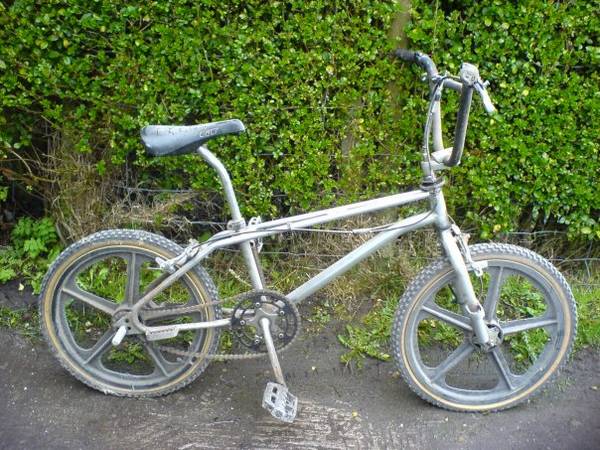 These frame & forks were originally purchased by myself in 1984 following a catastrophic failure on the downtube of my custom built DP Firebird (i.e. I snapped it!).. The GT Pro Bars were inherited from the Firebird. The Skyways were inherited from my first BMX (Raleigh Tuff burner). From memory thats a Sugino 44T sprocket, and some unnotable 1 piece crank. And, those are MKS Graphites, which I had swapped for some perfectly good Shimano DX's (I still donâ€™t know why I ever did that swap!)..

So, I enjoyed this set up until I hit secondary school (UK) in 1985/86.. After that, Mountain Biking took over for me, for the next few years.. and I believe I sold the Rickman to a friend.

It wasnt until 1993 that a chance meeting at University which involved making friends with a GT loving ex-bmxer who was also interested in reviving his old bike in the first generation of â€œOld-Schoolâ€!

I acquired the Rickman back from my friend quite easily, as it was not being used. I spent some time replacing parts, but it was hard getting bmx parts in the UK in 1993. Anyway, this explains the introduction of the Gyro, and Diacomp Bulldogs that you see here, in a â€œMid-Schoolâ€ sense..

Longer term, I plan to restore this frame to its original chrome glory and then maybe pair it back up with the 1983 GT bars that were chromed in 2011, and currently live on my 2009 Haro Freestyler.

More Bikes From shfdavidh (2 bikes in museum — View All)