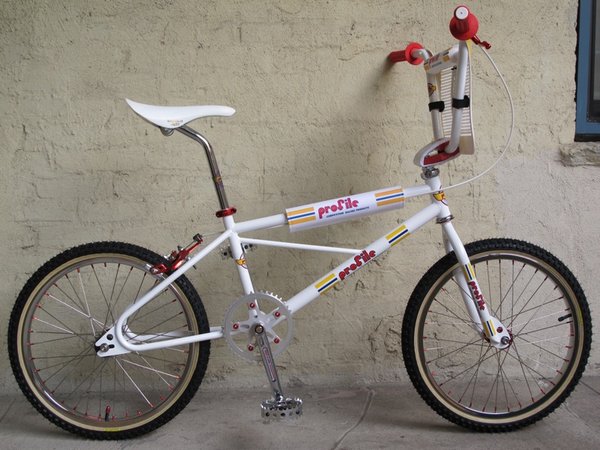 I blew the deadline for entering this bike into the winter build off, but continued with the build as planned. Here is my latest build - a Profile Champ Pro XL. I put this one together in about 90 minutes after getting bored with what was on TV Friday night!

This started with a chrome XL I picked up from Scott (JS-44SDS) after falling in love with his incredibly unique and exquisite Champ Pro at Summer Slam. The chrome had seen better days and had that brassy dullness to it in some areas, so I decided to restore it. I really love the way the white Champ Pro's look, so I decided to send it to Lou in Florida for him to work his magic. After seeing Matt's insane GJS paint job, I knew I wanted to go with paint this time. Ironically, after sending it to Lou, I had some regrets and panicked a bit and almost called him to ask him to ship it back as is. The chrome wasn't horrible (maybe a 5 or 6 out of 10 in some areas). In any case, I decided to stick with my initial plan and I'm really glad I did. Lou's work is stellar; the stuff of legends! This is what a professional paint job looks like and I'm beyond satisfied! Additional photos of the original finish in Chrome have been included since I always like to see the before and after pics.

I was grateful for this XL coming along when it did, since I had the bug to build a profile after attending Summer Slam and I like to feel comfortable on my rides. The bars are GT XT bars, aka Anderson bars, aka 10 gallon bars. The seat post is also a GT laid back stickered with Profile decal. The Profile decals and pads are repops since the OG stuff is almost impossible to find. The DC clamp, MX 901's, Kashi seat, dirt skirt, wheels & unitron grips are all NOS. The Profile 3rd Gen cranks are in mint condition and the spider is from Profile's retro cranks. The Hutch Pedals are from JDB (I Know, don't say it!). The tires are the re-issue yellow label comp III's and the Haro Plate was NOS as well. The GT Epoch head set was minty (thanks OSPK!). I must say I got really lucky with the decals coming up on Ebay and the pads coming up on the museum the day after receiving the decals. Otherwise, I wouldn't have this thing together yet. The decals pop nicely off of the white paint and I'm really happy with the way it turned out. I just need to get a rear (right side) tech 4 lever to replace the left side (didn't notice it was for the front until I began the build) and I want some red pedal cages. The chrome Izumi chain is on the way and it's all I need to take this baby for a nice spin before the weather turns bad here in NY. Special thanks to Rich6372 for working out the trade for the OG Hutch Western H race stem just in the nick of time!

More Bikes From quinonesm (10 bikes in museum — View All)