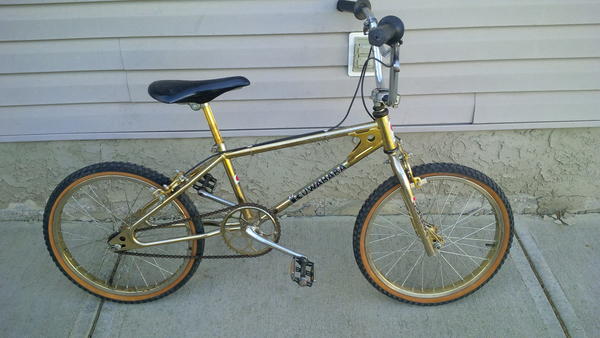 Lifecycle:1982 - 1983
Frame Model:KYZ (Originally named & marketed as KE-1)
Factory Colors: Chrome w/ Black parts, Gold finish on Chrome w/ Black parts (Canada only)
Frame:Chrome-Moly Tubing (Front Triangle) / High Tensile Steel (Rear Triangle)
Fork: 100% Full Chrome-Moly
Serial #:Starting T2, T3
Tubing Differences:Gusset w/ big and small hole (Version 1 - similar to KZ-1) / Gusset w/ big hole (Version 2 - similar to ET). Side by side, Version 1 has a smaller geometry than Version 2 with a shorter rear end similar to a Diamonback Silver Streak compared to a Senior Pro. Version 2 has a standard size geometry similar to the KZ-1, ET, Nova, and Laserlite.
Top Tube Length: 18.25"
Weight:27 pounds, 5 ounces
Note:Gusset has either a) a small hole on the right side next to the big hole, similar to the KZ-1 and KZ-2 or b) no small hole on the right side next to the big hole. The KYZ's without this small hole and are debated as being leftover ET's in chrome which don't seem to be the case as ET's are high tensile, not tri-moly.