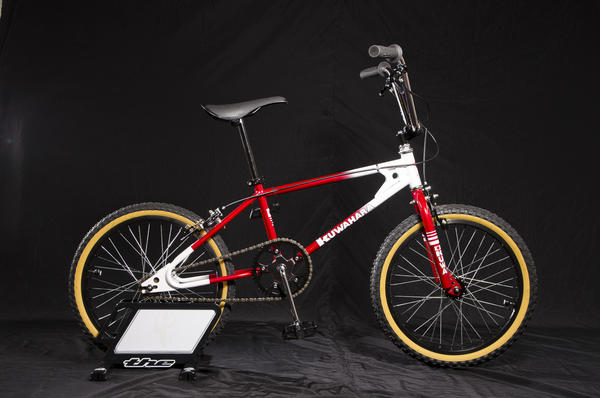 During my recent visit to the International Bike Show in Taipei (March 20th / 23rd 2013), I had the opportunity to meet with Mr Takuo and Mr Takashi Kuwahara (Father and son) to discuss a little about their Kuwahara ET.

They explained to me that back in 2002 Kuwahara decided to re-issue 300 bikes using NOS frame sets to celebrate the E.T anniversary and the first year of Universal Studios in Japan under the model KZ-2.5; due to their tremendous success they decided to create a second anniversary run 10 years later now called the Kuwahara KZ-01.
The bike pictured here, is the original display model that was used by the factory since the launch of the Anniversary edition in Asia back in July 2012; they made a run of 400 units to be distributed in Japan and another 400 to be sold worldwide, this piece was the very last KE-01 left in their inventory as of March 2013, both of them were very gracious to let me purchase it directly at the show.
I will post many other photos in the discussion thread.
Thank you for reading.

More Bikes From hutchpasto (15 bikes in museum — View All)