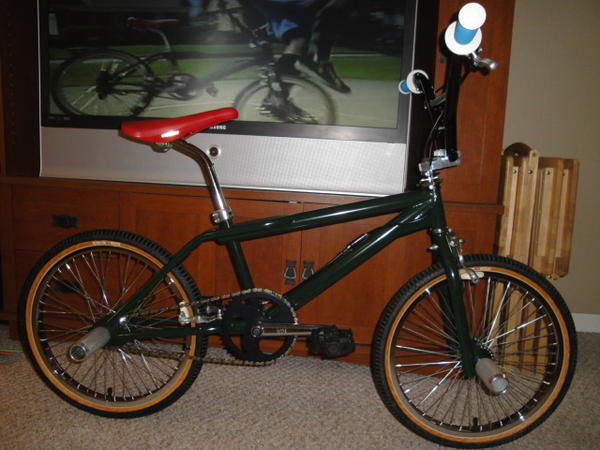 WOW! This one has taken some time coming together! The build starts off with what I believe is a late 1994 Hoffman Big Daddy frame and fork that I purchased from another museum member. The handlebars are Peregrine Q 1.5 bars and came from yet another museum member. Both the bars and frame and fork were re-powder coated by Chip at C4 Labs. The Dia Compe brake pads, gyro, gyro cables, front sprocket, Peregrine Super Pro rims and MKS Graphite pedals are all NOS. Nice survivor parts used on this build are Japan stamped Dia Compe Tech 77's, the TNT freestyle stem, the GT Profile Cranks, the front Peregrine hub and the Nankai early generation freecoaster hub as well as the GT layback seat post and the GT double seat post clamp. The Nippon front brake, AD990 rear brake, and ACS R.L. Edge 20x1.75's are all used but in REALLY nice shape too! The Mushroom II grips, Kashimax seat and KMC chain were new parts that I recently purchased. I'm a huge Kevin Jones fan and love riding flatland - when I get the time! This build is NOT spot on to what KJ rode in 1994 but, it's SUPER close! For this bike, I chose Hoffman Day Smith pegs. I think they came out in the late 90's but I was reading a KJ interview somewhere online though and he said his two most favorite Hoffman parts ever made were the Big Daddy frame and Day Smith Pegs so I went with those pegs. Regardless, I really enjoyed seeing this bike come together. I equally enjoyed watching "Wheelies" this morning while wiping the bike down - makes me want to go ride flat! That's it, I'm going riding! Thanks for looking! Ope

More Bikes From opedogg47 (42 bikes in museum — View All)