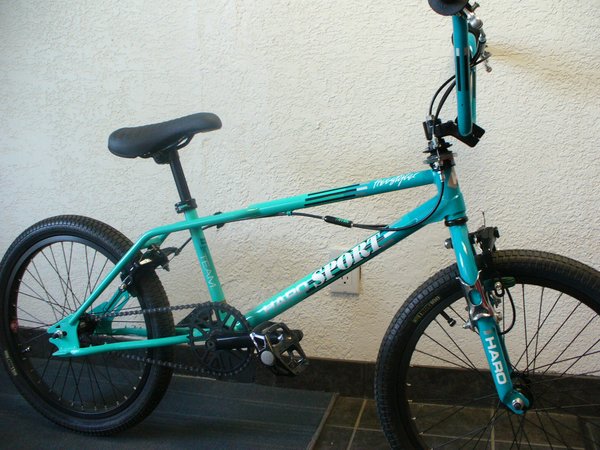 So I think we all know the the infamous 88.5 Sport isn't quite as popular to most collectors due to the lack of the rear chrome triangle and no 990 mounts but hear is an exception. My goal with this bike (and I'll be honest) was to make the museums finest looking 88.5 Sport. I never have seen one I liked until I built my own.   I've always eyed up this frame and fork that used to be canadascott's. Finally we struck up a trade on a 1997 Haro Ultra and here we have the finished product.

So I took what Chromey had to say about full paint Haro's "should have mags as a rule of thumb" into consideration and went to work. Since I don't like mags (honestly I can't stand mags!!!) I set out to prove that a full paint Haro could look killer with a nice ALL BLACK wheelset and ALL BLACK tires. The result, in my opinion...awesome!!! So the bars on the bike are the 2006 Sport retro bars with repro decals from joe6187. I also had matching Peregrine seat clamp, Gyro and ACS stem decals made by botou888 in mint green. This is the most color coordinated bike I have ever built next to my FitS3.

So from there I chose a mix of new and old school parts to create something I would actually be able to ride comfortably. It reminds me a lot of my FitS3 to be honest. It is a little lower ride due to the ACS 45 Slant Stem and 7" rise new school bars creating a nice tight cockpit (which I really enjoy, probably because I'm only 5'9 1/2" tall).

During the build I had my Group 1 stem repowdered and polished up but once I installed it I couldn't handle another Haro build with the "ever exciting Group 1 stem". So I decided to go with the ACS 45 Slant Stem because I always thought they had a pretty cool look to them. Then to top it off I bought a set of ACS BOA brakes and are you ready for this??? I DRILLED OUT A PERFECTLY GOOD NOS HARO FRAME SO I COULD USE THEM. That should make some real "old school purists" cringe a little but really in all reality let's be honest here, it's only a bike.

This will probably be my last build. Everytime I build a bike it's exciting all the way up until it's actually built. Then I kind of get let down by it. I say to myself "Well that's it, the excitement is over now" and I can't help but feel kind of let down or something, so I give up. I don't think it matters what we try to fill the void with because we will always feel let down when it's all said and done. Why? Because it's just a material possesion. You know the saying "The guy with the most toys wins"? Well, I can't relate.

Oh, one more thing.  This frame is actually quite unique because it could very possibly be the only 88.5 Sport frameset with the Team decal on it.  Lot's of members have commented that the 88.5 Sport's never came as a Team Issue.  So that's kind of a cool trademark for this particular bike.  That's also why I chose the 3 piece cranks and 88 Team Chainring.

New generic front cable and last but not least...

a New 88 Haro Repro Chainring (matt and me)

That about wraps it up for this camper...I think I'll ride this one like I stole it!!!

More Bikes From xtremevert (19 bikes in museum — View All)