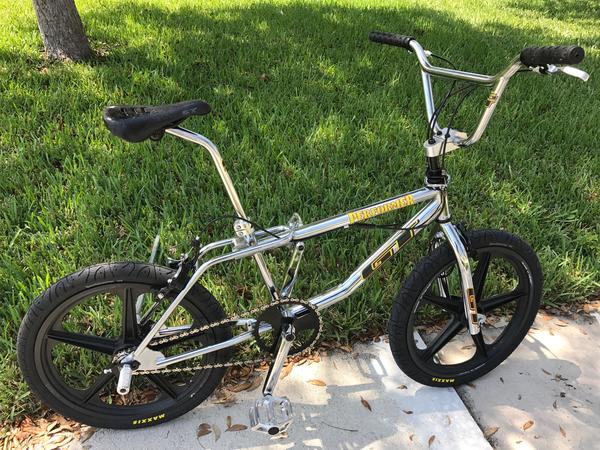 1996 GT Performer with '94 decals, NOS and new parts. This is the "twin bike" so the wife and I can match down at the boardwalk.

Saw this bike (minus wheels) on eBay. It was located in Honolulu, Hawaii. It had the 1994 Performer decals on it, so I thought it was a '94 model. I was looking for a twin bike to my 1994 Performer, so the wife and I could ride the boardwalk with matching GT's. The stickers on the bike you see here are reproduction (Jaw Dropper) decals. It is basically identical to my other bike except the chain stay spacer is round not square and I think the bars were cut down an inch or so. I found an Odyssey Pit Bull brake to match the other bike, those things aren't cheap! Rant 175mm cranks, Haro Fusion pedals, KMC Z410 chain, Z-Mag wheels, Tektro levers, Odyssey Hollow bullets out back, GT grips and of course the Maxxis Hookworms. It has a used (less worn) Tien HSIN headset because the original was faded and crusty. I had the forks re chromed as well. The frame's chrome is ok but has light scratches and minimal surface rust in the usual places. Oh yeah I bought an Origin 8 16T freewheel and it is loud but still cool. I hope it's cool but I put a picture of this bike's twin in the photos down there. Thanks for looking.

More Bikes From JNitrous (21 bikes in museum. View all)