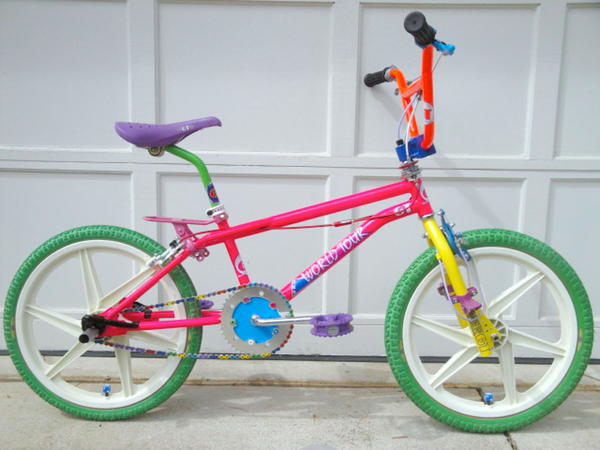 S O L D !!!  WOW! Better have your sunglasses on when you look at this thing! I know what you're thinking. You are asking yourself, "what was HE thinking?". And, I get that! What I wanted to do with this build is to assemble a bike that lets ANY person that looks at it know, exactly what I am into - 1980's GT freestyle bikes! Such a defining, yet fun time in my life! I started with the GT stamped 4130 chromoly frame that was a complete from a local pickup. It even came with the original purchase receipt from 1985! I went with my all time favorite color on the frame - day glo pink - and started adding parts to the bike that came from the 1984 to 1989 era. Nothing on this bike is newer than 1989! The twist I added though was that I had to have as many different era correct colors on as many different parts as possible! The forks are special - they started out as NOS green 1984 Pro Performer forks. No weep holes on the bottom AND dual cable guides! A MUST for my build! I ran a NOS MX 901 on the front so that I could utilize the right cable guide - that was important for me! The bars were nice survivor 1986 Pro Performer bars in original day glo orange. I wanted them to look new though! The seatpost is an NOS 1985 green GT layback while the lavender seat is NOS from 1987. The seatclamp is NOS from 1988. The black framestanders were NOS prior to mounting as were the slightly longer GT tube rides, that still have the original bubble font style lettering. Those items started to come out in 1989. The OGK Performer mags were very, very clean survviors and mounted on them are NOS green GT Shinko's! The rear tire is a 20x1.75 while the front tire is a 20x2.0 - just to make it that much more rare! It has the 1985-86 GT stamped Power Disc in Hawaiian blue and a silver 43 tooth GT stamped chainring. The chainring bolts are the NOS multi-colored GT bolts! I used NOS black GT/A'me grips so that they DON'T get dirty easily. The brake pads are NOS white, GT stamped that first appeared in a GT catalog in 1989. The dark blue GT Mallet stem is 86 stamped. Pedals are NOS KKT in lavender and the GT forkstanders are NOS purple. Lets not forget about that frame extender either! NOS PINK! As far as the levers go, I decided to go Odyssey RX3's. There was a GT add in 1986 with Brian Scura on a blue GT with yellow RX-3's on it. I mis-matched the levers with the left lever being gray NOS and the right lever being blue NOS. The only bad thing is that one of levers logo's is printed while the other one is stamped. Gyro cables are NOS Odyssey - top one white, bottom one red. And, I topped it off with blue dice valve caps and an NOS Tioga Crazy Chain! If that doesn't say 80's GT, I don't know what does! Lastly, I gotta say thanks to Chip at C4 Labs who did ALL of my powder, all the different year models of stickers which came from Ultrahive and all of the museum members who helped me bring all of these parts together! Thanks for helping make my vision a reality! Thanks for looking! Ope

More Bikes From opedogg47 (42 bikes in museum — View All)