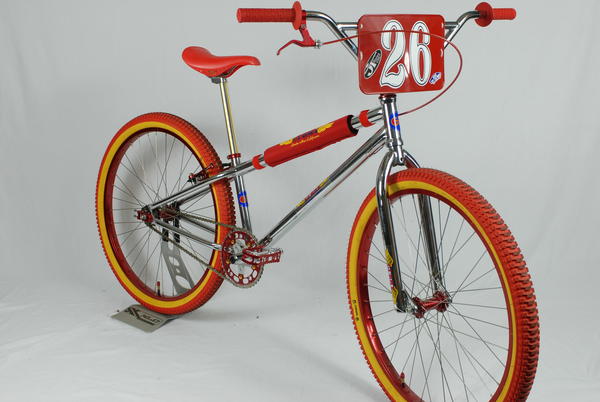 I redesigned where GT failed! If you want it done right, you have to do it yourself. (Now, blue and red versions)

I have always loved the aesthetic of the cruiser frames with the geometry of the top tube in line with the seat stays.  When I discovered GT was putting out a 26" with this beautiful frame geometry in chromoly for 2012, I was pumped.  I became even more excited when I saw on the website that there was a chrome version.  My excitment soon disappeared as no one had the chrome version in stock nor could they order one for me.  GT was no help with locating a chrome version.  I literally contacted bike shops all over the world trying to track down a chrome version--nothing!  The best information I could get was from a GT rep who advised that GT likely made a prototype in chrome, shot it for the website, but never put the chrome version into production.  Needless to say, I gave GT a piece of my mind!  Clearly, the bike is being marketed to older dudes like me who want the bigger 26" bike but with a connection to the good old days.  But why tease us by putting a chrome version on the website (two years in a row) and then not produce it?!  Guys like me want a chrome one!

I have been proven correct, as you can still buy the 2012 version in black everywhere--clearly they are not selling well.  I would not be surprised if GT hasn't even sold any of the 2013 ones.

Determined to make this vision of mine happen, I resigned myself to doing what most us have to do in these situations--redesign the bike as it should have been made.  So, I bought a 2012 black version from the-house.com (heavily discounted) and began the adventure.  Striped the bike and threw away the crap parts it came with.  Sent the frame and fork off to Bush Polishing in Garden Grove, CA (Dave Bush, who chromed the GTs, among others, back in the day) to be chromed in GT's original homeland.  Had Bush grind down the brake cable guides on the top tube for a more old-school look.  Bought the 2014 SE Racing PK Ripper 26" for the blue anno wheelset to put on the bike.

This is my modern version of a GT 26".  Clearly, it is not era accurate to the beautiful GT 26"s of back in the day, but with its chrome re-birth in OC and the blue anno parts, it channels the spirit and soul of those glorious legends.

Fourth picture is GT's production version so you can see what it started as and what it became.  FURTHER PICTURES IN THE COMMENTS