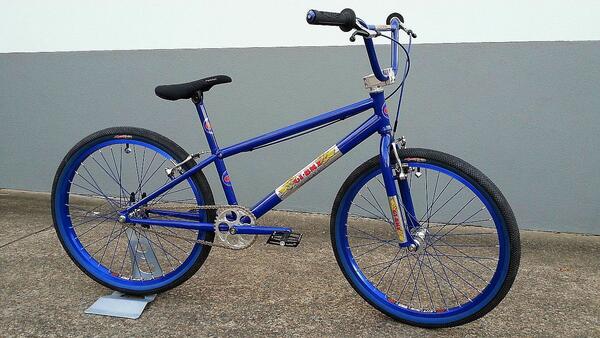 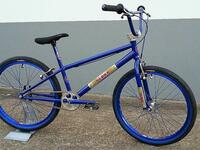 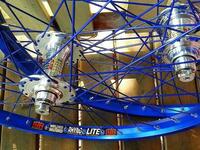 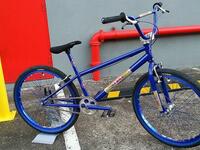 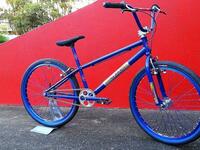 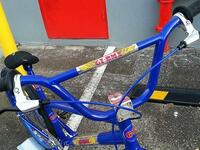 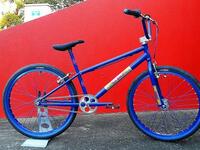 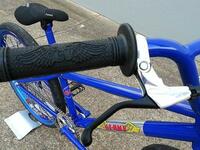 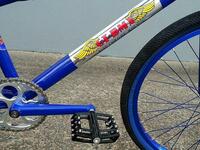 Blue On Blue Overload
The idea was to build a monochromatic retro 24" GT.
The project began with a brand new in the box matt grey 2013 GT Interceptor 24 frame.
I powdered the frame, fork, bars, cranks, spokes, seat post all in the same blue color.
GT Parts include: frame, cranks, stem, headset, sprocket, hubs, grips.
The seat is a GT wing-logo'd SDG.
Museum-member waza007 was enlisted to make the decals, including the custom-sized downtube & hub decals.
The downtube on this 2013 frame is much larger diameter than the 80's version,
so using an og-style decal there would appear diminutive. Actually, it looked ridiculous.
The new larger one is in proportion to the tube diameter, and just looks right.
I was going to run a GT fork initially, however, the steerer tube wasn't of sufficient length to then use the GT Mallet stem,
so the Texas Fireman's Cruiser fork you see on there now came into play.
This also allowed me to run the DXR brakes front and rear.
The Rhyno-Lite XL hoops match the blue powder, and the blue-wall Speedsters round out the build.