A potent mixture of polish, chrome and a touch of blue..

As soon as I got this bike, I completely disassembled every nut, bolt and nipple. I sent the bars and forks out to be re-chromed. While I was at it I decided to chrome the GT Rhythm System Hubs and the Crupi spindles. I think they turned out sweet. Then it was time to hand polish all of the aluminum parts to a mirror finish. It took a while but turned out better than I was expecting. I also added all new chrome plated bolts. It's taken a while finding and changing out parts to get it where I want it, I think I'm finally done with this one. Thanks for checking out my post!!!

More Bikes From OTHBMXR (10 bikes in museum — View All) 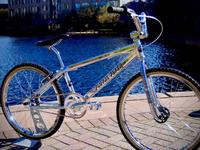