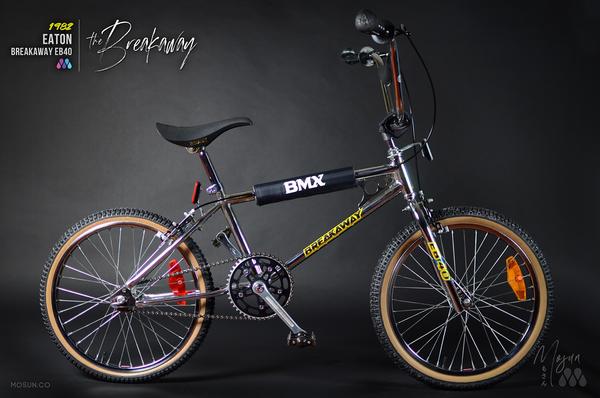 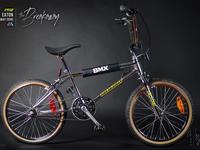 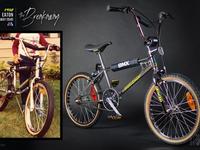 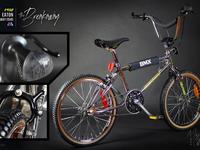 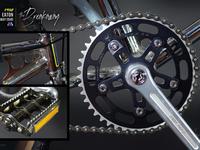 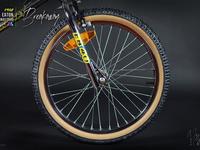 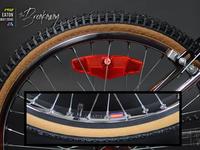 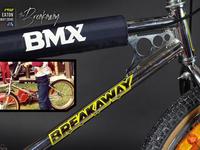 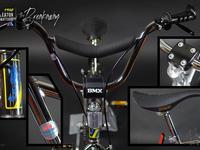 An exact replica of my first childhood BMX, built up from a picture replicating every part exactly. However, all the "copy" or "type" parts have been upgraded with the Actual parts they were copying back then.

In 1982, I received for Christmas, my very first BMX. It was an Eaton's Breakaway which was a Canadian department store brand bicycle.

For a department store BMX, it surprisingly had some very nice parts like a Sugino 3-piece crank and KKT rat trap pedals. I remember other riders always complimenting my BMX as it had those expensive 3 piece cranks. I rode that bike until 1990 when it was stolen from outside a corner store. I never thought that I would ever come across that bike or model ever again.

Once I started collecting a few years ago, I kept my eye out for any Eaton's Breakaways that should come up for sale on the internet. Then finally, at the end of 2012, I found the identical frame & fork with a few of the parts that came stock on it.

Since the only thing I had left of my first BMX was a picture and some memories, I was able to re-build it with the exact same parts (or close to it as possible) as it had back in 1982 when it rolled out of the factory. I tried to make sure everything on this build was either NOS or in Mint condition. The only parts I could not find were the Cheng Shin Snake Belly tires so I put on some NOS Hwa Fong Snake Belly tires. Believe it or not, I actually found my original Fuan cobra grips in a shoe box I had stored in the basement years ago along with the V-Bar handlebarpad. I remember taking them off to replace them with some other kind of grips but I totally forgot I actually kept them and had them stored all along!

For the decals, since nobody in the world reproduces the decal set, I decided that I would need to reproduce them myself. So I tracked down and bought a 1983 Eaton's Breakaway in blue and traced the decals, vectorized them, changed the colors to yellow and blue just like the originals on my BMX and had them professionally printed by BMX-Rider.com. They turned out perfect! Identical to the factory originals!

I have many BMX's like Laserlites and Diamondbacks that are of some value to any collector, but to me, this BMX is priceless.

More Bikes From mosun (16 bikes in museum. View all) 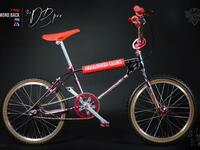 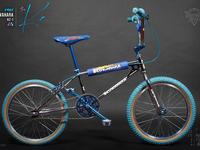