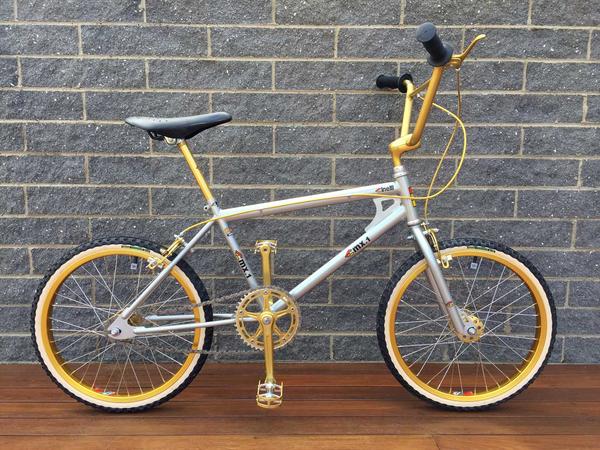 The Cinelli MX1 is my old school grail BMX, I never thought I'd find one so I was pretty stoked to get my BMX Ferrari...

The Cinelli MX1 is my old school grail BMX, I never thought I'd find one so I was pretty stoked to get my Ferrari BMX and build it as close to original specifications from back in the day. That was about 3 years ago, the parts being super rare have taken ages to source and I have build up a collection of parts as well as stumbling across some more frame sets in the process.

It was quite difficult to obtain information, with only a couple of original advertisements showing the Frame, Fork, Stem and Seat post as a set along with other component group sets. My understanding is that they were sold in kits and dealer built using recommended components from other manufacturers in Italy [predominantly] , France and Brazil.

This was surprising given that Cinelli is famous for its road/ track bike handlebars. Research on some survivor examples show that they were built either with a style identical to Race Inc (lf not actually Race Inc) or a style similar to Redline v-bars but with slightly thicker tubing. Update on Handlebars - I have been informed by an Italian BMX expert and fellow museum member (steelmadness) that the bars used (both straight and V crossbars) were manufactured by italmanubri or ITM.

I have understood that Campagnolo acquired Universal parts, a brand formed by an Italian company called  Fratelli Pietra Società Collettiva that was established in Milan during the 1920’s and still in operation until the mid 1980’s. They were the standard equipment on many high end road bikes in the 1960’s and 1970’s. They also produced a BMX only brake set called the Universal 185, which came in anodised Blue, Red, Gold and Silver to match the Cinelli MX-1 colour range.

The Plastiche Cassano grips were mushroom style grips with "Made in Italy" embossed on the inner flange; they came in Blue, Red, Yellow and Black.

Pretty much all the survivors I have come across wore Michelin Cobra tyres [French] or Pirelli tyres [Italian brand manufactured at Brazilian plant] on Ambrosio rims. Despite the original advertisement specifying sew-up/ tubular  Clement [French] tyres and Nisi [Italian] rims, I believe that this combo was seldom used for the reason that "the 20" sew-up tires manufactured by Clement are arguably the most difficult to locate, especially in pairs & usable condition. The tread was actually applied to the casing by hand, so if they weren't stored properly, the tread would often dry out faster than the casing and begin to separate."; along with the easier use and convenience [in the event of a puncture] of Clincher stye wheels.

More Bikes From sdbmx (12 bikes in museum — View All)